Over the next few years Europe will be focussing on digitalising the economy. All European regions were given the chance to submit a proposal to the EU for starting a “European Digital Innovation Hub” (EDIH). The Northern Netherlands' proposal was approved in June 2022 and funding will be available for the next seven years.

Together with sustainability (Green Deal), digitisation is the most important pillar of the current European Union strategy. As part of the ‘Digital Europe Programme’, there will be a network of approximately 150 regional European Digital Innovation Hubs (EDIH). The aim of the EDIHs is to accelerate and broaden the digitalisation of the regional economy. To do this, each EDIH must organise and offer services, some of which are mandatory. In addition, each EDIH must build up its own specialisation to be shared with other EDIHs to create a strong European ecosystem for digitisation. EDIHs (budget: 1.8 million per year) are financed for seven years by the EU (40%), the national government (40%) and the region (20%). After this point, they must be able to operate independently. The EU offers many services to support EDIHs in their role as catalysts for digitisation.

The Netherlands opts for industrial EDIHs

The Netherlands will operate five EDIHs, one of which will be in the north, and each will build on the existing regional Smart Industry Hubs. Our country has therefore opted for an industrial implementation of the EDIHs. There will also be one EDIH with a focus on the public sector. The Dutch EDIHs will work closely together through a back office, an underlying Smart Industry programme and a shared approach to the various EDIH services. The specialisations will also be coordinated at national level.

EDIH Northern Netherlands: catching up and positioning for the future

Although the public sector in the north is one of the frontrunners when it comes to digitalisation, the industry overall is lagging behind considerably. This is not without risk, as industry is and remains an essential part of the Northern revenue model. Digitalisation offers unprecedented opportunities, but companies need to participate. In this context, EDIH Northern Netherlands (EDIH-NN) is simultaneously working to clear backlogs (using generic services for digitalisation) and create a strong position for the future. 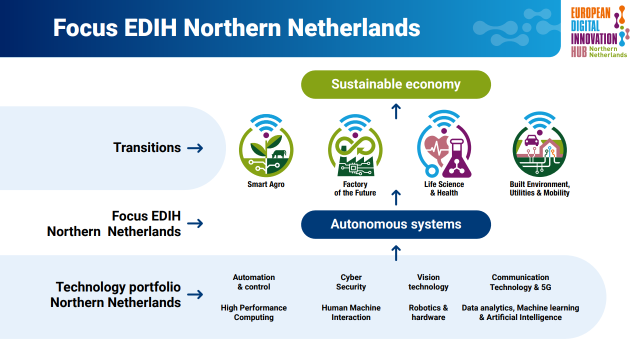 In addition to generic services to accelerate digitisation in companies, the EDIH-NN will devote extra focus on autonomous systems (see box), in particular to support the four key transitions that need to be made in order to achieve the desired sustainability of our economy: (1) Smart Agro, (2) Factory of the Future, (3) Life Sciences & Health and (4) The Built Environment, Utilities (especially energy) and Mobility. EDIH-NN reinforces the previously adopted Northern innovation strategy, described in the RIS (Regional Innovation Strategy). The Northern Netherlands is a true transition economy, and autonomous systems play a key role in this. By strengthening ourselves further in this area, we can create a continuous flow of new opportunities for companies and generate enthusiasm. The Northern Netherlands has sufficient basic expertise within the knowledge institutes and companies to develop into a national and international leader in this field. Over the next seven years, this knowledge base will be expanded through the EDIH-NN.

In addition to opting for autonomous systems, EDIH-NN applies a number of criteria to create maximum leverage. It focuses on (a) stimulating the leading companies (companies with supra-regional sales), (b) on companies that are part of the value chains (development, production and application) of autonomous systems and (c) the underlying services in the transition areas mentioned.

Autonomous systems are commonly known as self-propelled transportation devices such as drones or self-driving cars that can navigate without human intervention and react to unforeseen circumstances. Conceptually, it is an advanced organisational concept from measurement and control engineering – made possible by advancing technology. A system performs a certain function, such as dehydrating milk or performing a bypass operation. The term autonomous systems refers to when this function can be performed independently, i.e. without human intervention. To do this, it must have built-in intelligence so that it can observe and correct itself autonomously. In terms of complexity, this can range from relatively simple functions such as controlling a traffic junction to very complex, such as complex production lines or operating robots. Complex systems are extremely sensitive, self-learning, involve multiple functionalities (system of systems) or are based on feed forward control. Society is becoming increasingly complex. Autonomous systems meet the need for better (more robust, higher level) control of this complexity.

How will the EDIH-NN work? 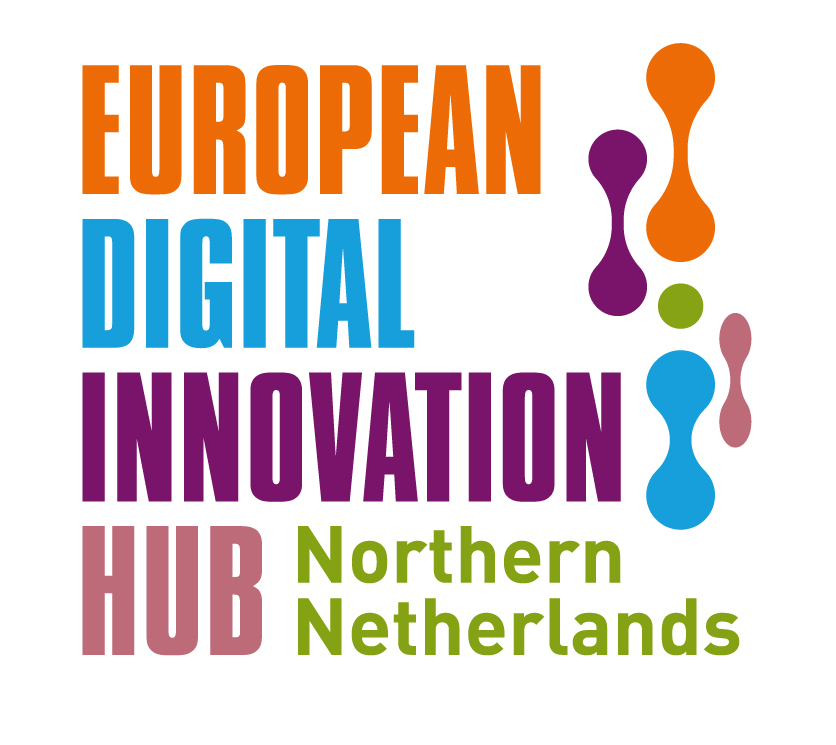 All EDIHs will work according to a pre-defined programme with specialisations for regional situations and choices. This results in an extensive work programme for the EDIH-NN. 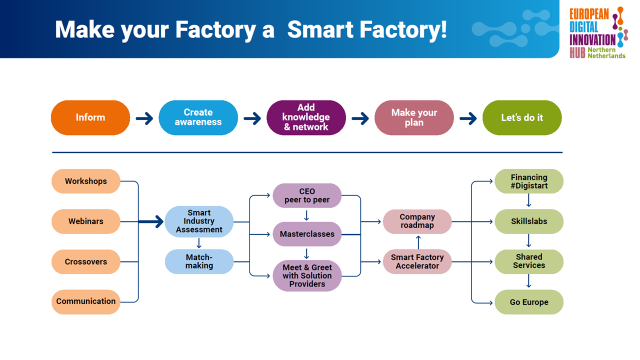 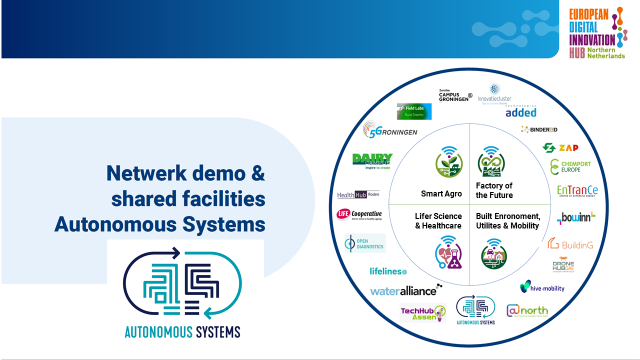 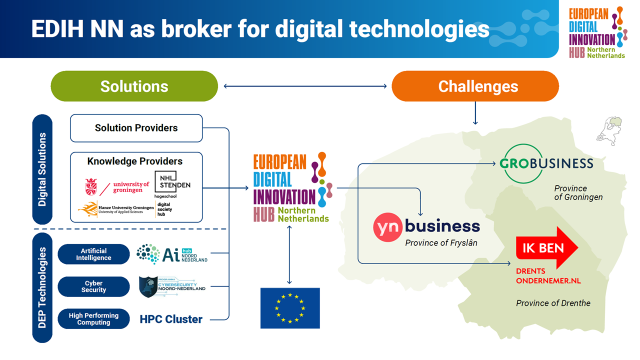 Seeing and being seen

The European ecosystem for digitisation is based on the exchange of knowledge and expertise between European EDIHs. It is important to be recognised and acknowledged in this as a region. The Northern Netherlands can provide an attractive proposition for autonomous systems built around: